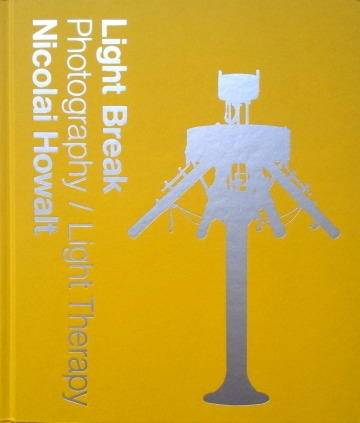 Light Break takes, as its point of departure, the historical practice of medical phototherapy, which doctor and Nobel laureate Niels Ryberg Finsen (1860-1904) developed and practised in Denmark at the end of the nineteenth century. This involvement with medical history has led visual artist Nicolai Howalt into a field of photographic work where sunbeams hold central importance. In individual one-off photographic pieces, Howalt investigates and visualizes visible and invisible areas of the light spectrum, and the power of the life-giving as well as destructive radiation of sunlight.

Light Break is a documentary and aesthetic encounter between photography, history, science and visual art. Nicolai Howalt's methods and experiments reflect a fundamental interest in photography and light as material, in this case making specific use of scientific methods and apparatuses of the nineteenth century. During his investigations, leading to the work presented in Light Break, Howalt borrowed a number of Finsen’s original lenses from Medical Museion, now part of the University of Copenhagen in Denmark.

Inspired by Finsen’s method, and by making use of Finsen's original coloured filters and lenses as well as contemporary coloured filters, Howalt was able to absorb select areas of light from the sun, allowing the remaining areas of the electromagnetic spectrum to pass through Finsen's original rock crystal lenses onto photosensitive paper (C-print). This unique method of light exposure resulted in a series of original imprints created by the sunrays passing through unhindered, directly from the sun and onto the paper. A universe unfolded, almost devoid of any subject matter, depicting instead the raw impressions of the sun and of light itself.