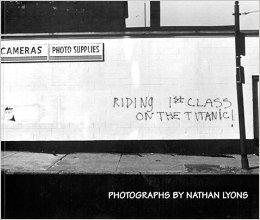 Whatever language we speak, we are confident that we know its structure. We assemble sentences using nouns, verbs, and adjectives in appropriate sequences to make ourselves understood. In Riding First Class on the Titanic, Nathan Lyons also employs sequences to create meaning but in a different form of language - a visual language. Unlike conventional documentary photography that explores a specific topic, location, or event Lyons assembles images made in many different cities over a period of decades. The public spaces he photographs are usually devoid of people, but filled with the utterances of the populace.

Reflecting his interest in found language and contemporary mark-making as evidenced in graffiti, billboards, storefront windows, and public and private displays, Lyons's carefully orchestrated images offer layered interpretations that challenge our cultural assumptions and beliefs. One level of resonance is established in the diptych in each frame, which is further extended by its visual association with an adjacent frame. Each sequence can be thought of as a movement within the larger symphony of Riding First Class on the Titanic. This exhibition and its accompanying book is a form of discourse that encourages multiple readings, each successive viewing revealing more.